Patty’s Juicy Burger of a Blog

Blogs Made By Kids For Kids

The Significance of Character and Dialog in Tom Sawyer

In Mark Twain’s The Adventures of Tom Sawyer, I’m most currently interested in breaking down and understanding the character of Tom Sawyer, as that is what the first few chapters mainly focus in on. In just the first chapter, we get to see why Tom is the way that he is through his Aunt Polly’s perspective. She wants to discipline him, but cannot bring herself to do so. She says, “He ‘pears to know just how long he can torment me before I get my dander up, and he knows if he can make out to put me off for a minute or make me laugh, it’s all down again and I can’t hit him a lick. I ain’t doing my duty by that boy, and that’s the Lord’s truth.

I give my praises to Mark Twain due to his eloquent use of diction and language to simulate how each character speaks. A reader can understand the idea that this takes place in a more rural setting in an older time just through dialog, and not wasting time on explaining it, which would only break the immersion. 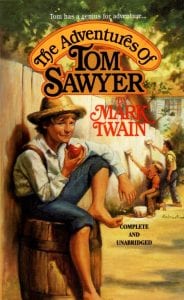